It is with regret that I inform you that Roger sadly passed away last week after a severe stroke.

On behalf of Bancroft’s and the Old Bancroftians’ Association, our thoughts are with his wife Gill and family at this sad time. 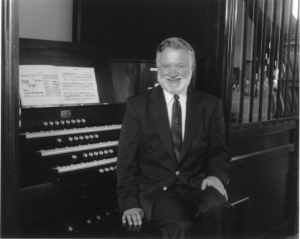 The following has been taken from Roger’s brochure that he had shared with OBA office some years ago.

Roger Fisher was Organist and Master of the Choristers of Chester Cathedral for 29 years and retired in 1996 to concentrate on his career as a recitalist, teacher and adviser on organ construction. From 1997 to 2004 he was Features Editor of Organists’ Review.

Born in Woodford, Essex, he was educated at Bancroft’s School and studied at the Royal College of Music with  Dr Harold Darke and Prof. Herbert Howells, gaining his ARCM, FRCO and CHM diplomas and winning the Geoffrey Tankard Prize for Organ playing. In 1959 he became Organ Scholar at Christ Church, Oxford and studied with Dr Sydney Watson, Dr Bernard Rose and Dr H. Kennedy Andrews.  During his student years he was Organist of St Mark’s, Regent’s Park in London. He became Assistant Organist of Hereford Cathedral in 1962, and Assistant Lecturer in Music at Hereford College of Education in 1963. During this period he studied the piano with Professor Claud Biggs and acted as an assistant chorus master, organ soloist, and accompanist for  The Three Choirs Festival,

In 1967, he took up the post of Organist and Master of the Choristers at Chester Cathedral and, upon completion of the rebuilt organ in 1970 at Chester , he embarked on the first of many BBC broadcasts and numerous recordings (including several for EMI, Decca and RCA) which have had world-wide sales. Of these, The Great Cathedral Organs series, including Roger’s recording at Chester, have just been re-issued on CD in a boxed set, by EMI.   In the last 15 years, or so,  many of his CDs have appeared on the AMPHION label, but he has also recorded for a number of other companies, not only in the United Kingdom, but also in the USA, South Africa and Germany. As a pianist, he has collaborated with Gordon Pullin in an 8 CD set of The English Tenor Repertoire, CDs entitled Johannes Brahms – The Final Works, Songs of Paradise (poems by Christina Rossetti) and A Sterndale-Bennett Recital.

He was frequently asked to act as organ adviser to churches, chapels and cathedrals and had also advised on organ projects in colleges and concert halls. He toured frequently and extensively as a recitalist in Europe, Scandinavia and North America, visiting Australia also in autumn 2004 and South Africa in 2002, 2005 and 2007. He had a wide repertoire and specialised in the music of Bach and of the Romantic Era.  He was a keen pianist and gave piano recitals and concerto performances when time permitted. His books Master Class with Roger Fisher and Towards keyboard fluency giving practical advice to pianists and organists, had recently been published by animus.

Roger Fisher OB 1947-1954
Roger’s funeral will be livestreamed from Chester Cathedral tomorrow afternoon. The link is posted on the Friends of Cathedral Music’s group facebook page.
https://www.facebook.com/groups/225405120824086/permalink/4585672331463988/
Rosemary Downey a friend of Roger has shared the following with the OBA Office….
I have known Roger since the early 1980s, when he was Organist and Director of Music at Chester Cathedral. As well as being an excellent choir trainer, he was also a very accomplished organist and an excellent teacher. We lived in North Wales at the time and my husband used to travel to Chester for organ lessons with Roger, benefiting hugely from his expertise. Following his retirement, he and his wife, Gill, moved to an old chapel in a small village in North Wales, where he installed an excellent organ and used to give small-scale recitals to friends. He became very involved in the music scene in North Wales, playing for a while at St Asaph Cathedral when they were without a Director of Music, and also playing and training the choir at St Peter’s Ruthin, now Ruthin Minster for some time. He continued to tour the country giving recitals until a major stroke over two years ago left him in a very poor state of health, and his gradual deterioration has been very hard on Gill and his family.