The History of the School Crest

The School Crest is a version of the coat of arms of the Worshipful Company of Drapers, the Trustees of the School. These arms are shown below.
They are particularly famous because the Drapers Company was, in 1439, the first corporate body in England to be granted a coat of arms.
The original arms comprise only the shield supported by two angels, but they were modified, initially in 1561, when the crest was added and the original supporters of two angels changed to the current lions, and again in 1613, when the shape of the crowns was changed and the motto added. The arms are described below, first in heraldry speak and then in translation:
Blazon, Azure, three clouds, radiated proper, each adorned with a Triple Crown Or Supporters, Two lions, Or, pelletted Crest On the helm, a wreath of the Company’s colours, thereon, a mount Vert, thereon a Ram couchant Or, armed Sable The whole hatchment mantled gules doubled argent

In plain English this means:

A shield containing three clouds each with the sun emerging from behind, all in their natural (‘proper’) colours on a blue background, each cloud is surmounted by a gold three tiered crown, Two gold lions with black spots (or ‘pellets’), Above the shield is a helmet on which is a ring of twisted blue and gold cloth, a green hill, and a gold Ram with black horns, lying down but with head raised. The whole coat of arms is on a cloak of red lined with white or silver.

The school crest that is most commonly used and with which most of us are familiar is this: 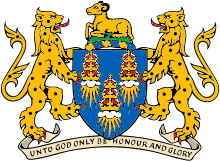 The crest that has been used on the Old Bancroftians’ web site however was taken from the history of the school that was published as a book in 1937 to celebrate the tercentennial of the founding of the school.
Symbolism

The Drapers’ Company’s patron is the Virgin Mary.  It has been suggested that the arms represent that from Mary, through the Holy Spirit, comes the divine Son of God: thus the sunbeams represent the brilliance and light of the Virgin Mary, and the cloud which is a frequent symbol for the Holy Spirit. Mary was deemed to be an empress; the symbol for an emperor/empress is the triple crown, still in use by the Vatican City.

The triple repetition is dictated by the general principle of three charges to a shield apparent in medieval heraldry.