Formed in 1894 as Old Bancroftians FC, (yes it was originally an association football club!!) The club is one of the oldest rugby clubs in Essex. Known as Bancroft RFC since the 1970s, the club is open to Old Bancroftian and non Old Bancroftian members alike, ensuring the competitive but sociable ethos fostered at the School is maintained.
The club represents a thriving community, currently fielding three sides in Essex leagues, with competitive and friendly rugby available for all playing standards, set in a convivial social atmosphere

Bancroft RFC has (social or playing membership) contact Steve Thirsk at stephen@thirskwinton.co.uk or on his office number – 0208 505 4777 . Further details on the club can be found on the BRFC club website is at http://www.bancroftrfc.com 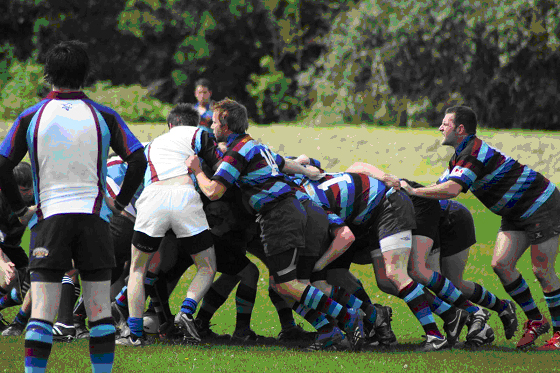 Bancroft RFC pack down against the Old Bancroftians XV in the traditional end of season fixture.

The Old Bancroftians’ Association also field from time to time sides for charity matches played at Bancrofts RFC. If you are interested in being available for this ad hoc team please contact Matt Barrett at mbarrett@thirskwinton.co.uk or on his office number – 0208 505 4777