There had been an unsuccessful attempt to form an Association in the 1860’s.
An undoubted School spirit was developing which led to various informal OB activities.
This gathered strength in the 1890’s, and in 1892 the Old Bancroftians’ Football Club was established, which in those days played Association Football.
On 23rd January 1896 the first Annual Old Bancroftian Dinner was held at the Haunch of Venison in Fleet Street.
The School’s move to Woodford also seems to have added weight to the idea and eventually a founding committee was formed to turn the concept into a reality.
The committee met for the first time on Michaelmas Eve 1909, and the inaugural meeting of the Association took place on Friday 26th November of the same year.
A constitution was agreed and the first President elected.

Initially there were but 50 members but by the outbreak of war in 1914, this had been raised to 213. 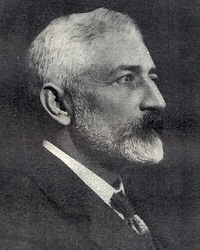 At the annual dinner held on February 8th 1910 the words Old Bancroftians’ Association appeared at the head of the programme for the first time, although the in reality the Association did not take over as organisers until the following year
Mr Playne was in the chair and made a speech presenting his hopes for the Association, saying that he was very proud to be its first president.
He looked forward to a great deal of work being done to make the reputation of the School grow and flourish.
He said that the Association stood for the spirit of the School, the spirit that made the School. Perhaps the real reason for the association was that it would keep the young and old members together. Later that evening the first Committee was elected, including its first secretary, D McKichan.

The Bancroftian magazine of March 1910 commented that: “The speech showed us once again that no Old Bancroftian is more keenly interested in the success of any OB institutions than the Headmaster of Bancroft’s school, and there can be no better augury for the success of the Association than the enthusiasm of its first President.”

There is no doubt that the continued success of the Association over the years, has relied upon the enthusiasm of Presidents and Committees, as well as the enthusiastic support of the school’s Headmasters

The OBA grew steadily, in terms of membership, affiliated clubs, and activities.
In 1950 there were just over 1500 members and at the time that membership for life for all Bancroftians was introduced in 2005, there were 3175 members, and a further 529 Old Bancroftians had registered at the Web site but who were not members.

We estimate that there are in the region of 6000 living Old Bancroftians. Help us to find them. Tell those you know about The Bancroftian Network and if they are not already registered persuade them to keep in touch.
More information on the about the OBA is available via the top menu.