It is with great sadness that we report the passing of Joy Wainwright who with her husband Ken were staunch and loyal supporters of the OBA and OBRFC. 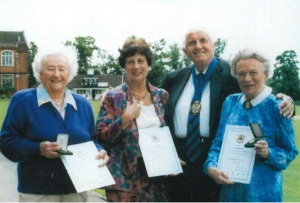 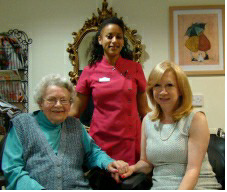 Joy’s association with Bancroft’s started when she met Ken Wainwright (OB: 1927-32), on a blind date, shortly before the outbreak of WWII.
They married during the War, when Ken was home on leave, and settled into family life when the War was over in 1945.
Joy owes her Christian name to the fact that she was born on Armistice Day at the end of the First World War.
Joy spent much of her early life in Ilford where she was educated at the Ilford County High School for Girls.
A member of the Ivor Evans Operatic Group and the Loughton Operatic Society, her interest in music was much evident.
On arrival in Theydon Bois she became an enthusiastic and positive worker on behalf of village affairs, a parish councillor, district councillor, and an active member of the Conservative Party.
During these years, support for older people was given by the formation of a “meals on wheels” service.
Joy instigated the formation of the charity the ”Playground at Theydon”, a successful and much admired facility for the young children of the village and from the wider community.
For many years the “Open Gardens” event was organised by Joy and enjoyed by the huge numbers of people who attended, these coming to Theydon Bois from far and wide.
Together with her husband Ken she was a founder of the Short Mat Bowls Club.
Joy was an active supporter of many activities taking place in the village, including the Short Mat Bowls club.
She regularly attended the Women’s Institute, the Music Society, the Theydon Bois Singers, and the Epping Forest U3A.
Her interest in local politics was undiminished.
In recognition of Joy’s many years of devoted service to the School, the OBA and the OBRFC, she was made an Associate Member of the OBA,
a recognition which she always said made her an “Honorary Old Bancroftian”.
98 Years lived to the full, and Bancroftians were fortunate to have benefited from so many of those years.