Derek William Frank Bullen, 81, passed away peacefully at home in
Poulshot, Wiltshire on 25th October 2018. He is survived by his wife Angela,
his 3 children and 6 grandchildren.

Derek attended Bancrofts from 1948-1956 where he enjoyed hockey, as
the 1st XI goalkeeper and he was an enthusiastic member of the
Combined Cadet Force.

Upon leaving Bancrofts, Derek joined the Army where he flourished
during an exciting posting to Ghana with the United Nations. Upon his
return he worked, initially in sales, before pursuing his passion for
training and personnel. He went on to become a consultant working
with large companies both in the UK and overseas.

His lifelong passion was his family and he met Angela Baxter whilst they
were both at school in Woodford. They were married in Surbiton in 1963
and had sons, Mark and Tim and a daughter Elizabeth (Liz).

Subsequently, they were blessed with 5 granddaughters and a grandson.
Family life was embellished with his love for the garden, wildlife and
travel and they spent many exciting holidays, walking and exploring in
the UK and Europe, in particular mid Wales.

Derek was a kind, principled man with a perfectionists streak which
occasionally compromised his love of cooking foreign food, in pursuit of
a rare asian spice supposedly integral to the dish. It also ensured that he
prepared breakfasts for his B&B guests alone, with his helpers happily
demoted to clearing the tables.

is time at sea was brief, despite the construction of a prized Mirror
dinghy which was holed shortly after launch. Later in life he and Angela
enjoyed exploring the rivers and seas around europe in more sturdy
vessels.

Diagnosis with diabetes and eventually kidney failure later in life forced
a number of lifestyle changes which he bore quietly and with resolve,
but, the lure of his sloe gin cache was a sporadic, and welcomed beacon,
right up until his last few days.

In his last few months he was cared for tirelessly by Angela and Liz with
help from a wonderful team and he passed away quietly, at home, with
his family at his side. 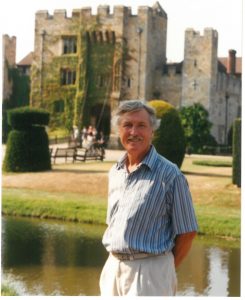