I am sure you will join us in welcoming Steve as our President for 2019-20. 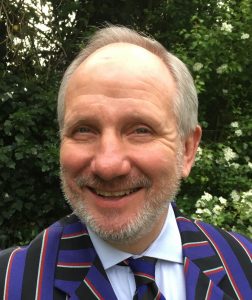 A message from Steve:

My first memory of Bancroft’s was visiting the old school swimming pool as a cub scout with the 36th Epping Forest South in 1970. It seemed such a daunting place (like a castle) and my memory of the pool was that it was almost like a bath! I could never have thought then that I would attend Bancroft’s a couple of years later – almost by accident.

My father was a curate at All Saints Church in Woodford; he was due to begin his first living as a Vicar, and the Headteacher at Churchfields, my primary school, thought it was good idea for me to take the Bancroft’s entrance exams. Much to my parent’s surprise (and mine) I won a scholarship… And so, the story began.

I can only say that it was, for me, seven very happy years. As a boarder, I was active in just about everything sporting and often represented both School and House teams.

After leaving school, I went to play Rugby at the BRFC and served as U19 Colts, and later as 1st team captain. Having studied Psychology at UCL, I then moved into sales and marketing in medical equipment, and have worked in the UK and abroad, in a variety of roles, also running my own company.

My associations with the school did not end there; I married Liz, who is Ben Franklin’s daughter, in 1995. We first met in the early 1970’s on a coach on a school ski trip (she was actually about 9 so we really didn’t have much contact then, but we did meet again many years later at BRFC.) We have now been married 24 years. I have also had 5 of my children all attend Bancroft’s and so, it’s fair to say, I feel like a small part of the fabric. My one regret is that none of them were in School House!

Several years later, when Malcolm Fleet was Chairman, he asked me to get involved with the committee. I wondered what I was getting into, but I can say that I really hope that the work in preparing newsletters; updating the web site, and so on, helped in maintaining pupil’s links to the school. I also served for six years as Chairman. It has all certainly been great fun, and challenging at times, but something I can say is that I really enjoyed contributing and ‘giving back’ to the OBA. Now I have been given the honour of being President – thank you to my fellow Bancroftians for the opportunity.

This is an exciting time for being President as the Bancroft’s community grows and the School looks at ways to enable students from all backgrounds to enjoy a fantastic Bancroft’s education. Indeed, just the same opportunity that I was so privileged to receive as the son of a clergyman all those years ago.

Over the coming year, I am looking forward to spending time with friends and making new ones, so please say hello to me whether I’m wearing the ‘gong,’ or not.

The Association needs OB’s from all generations to be involved, so that we can help each other: network, mentor, provide introductions and, not least, utilise social media to the benefit of all our members.

I hope that you will join me as I follow Ed Sautter as President. I give my thanks to him and all the work he has performed in the last year, and I hope that I can, likewise, help to grow the OBA.

Any cookies that may not be particularly necessary for the website to function and is used specifically to collect user personal data via analytics, ads, other embedded contents are termed as non-necessary cookies. It is mandatory to procure user consent prior to running these cookies on your website.